‘Women Prisoners: Throw Away the Key?’

‘Women Prisoners: Throw Away the Key?’

A thoughtful yet hard hitting documentary ‘Women Prisoners: Throw Away the Key?’ was shown on BBC 1 on Wednesday 15th June at 9.30pm. It was an opportunity to explore how Scotland jails more women than almost anywhere in Northern Europe, the reality of how expensive this is and the impact it has upon women and their families. The programme includes the experience of a young person Circle supports, through our partnership with the Shine Women’s Mentoring Service, whose mother has been in and out of prison since she was a small child. Circle provides whole family support to mothers, their children and families in their homes within their communities. This approach to supporting the most vulnerable families in our communities is what works and ultimately makes a difference to minimising the ‘shattering impact on the families’ of those who are imprisoned.

Baroness Helena Kennedy QC looked at an international example of prison reform in Canada and why more funding is not being given to successful justice projects in the community. The Canadian example has not evidenced the success anticipated, with numbers of women being placed in ‘community units’ quadrupling from the initial numbers they had been planned for. Is this the future reality for Scotland’s prison reform? The documentary questions whether changing the actual fabric of the prison estate is the answer, and whether this will address the revolving door of prison, short term sentences and the high numbers of women on remand. From the opinions contributed on this, it is apparent this should not be the alternative, but rather there is a real need to address why more funding isn’t being given to successful justice projects in the community. Lisa Mackenzie of Howard League questions why the voluntary sector has not seen more of an uplift on their financial security in being able to provide ongoing support in the community as alternatives to prison. This is clearly necessary as evidenced by the valuable work undertaken by community justice projects such as 218 and Tomorrow’s Women and importantly listening to the positive experiences of the women working alongside these services. These, along with Circle and the collaborative partnership approach of the Shine Women’s Mentoring Service and many others, are making a real difference in communities across Scotland in supporting women and their families.

You can watch BBC1’s ‘Women Prisoners: Throw Away the Key?’ documentary here.

Read more about ‘Sarah’s’ experience of her mum being in prison and the impact this has had on her family here. Sarah is supported by Circle through our partnership with the Shine Women’s Mentoring Service. 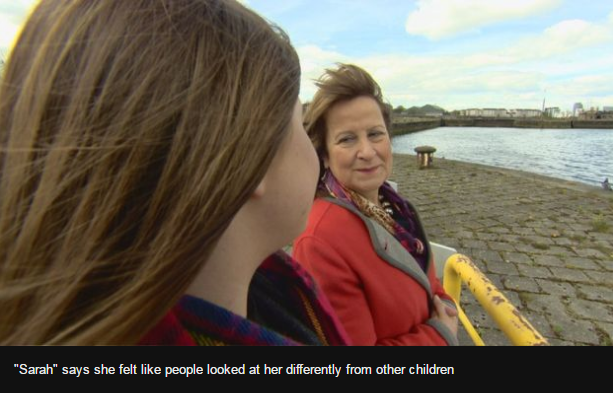 Baroness Helena Kennedy QC with ‘Sarah’ on ‘Women Prisoners: Throw Away the Key?’