DARED (Do A Run Every Day) 2020 was the third installment of Circle’s Summer challenge event and this year was by far the biggest and best yet. In total over 315 runners took on the 1 mile or 5 km challenge each day in June and raised an incredible £36,500+ 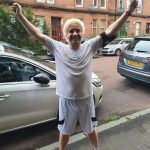 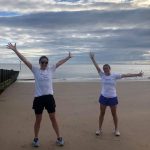 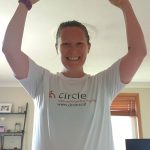 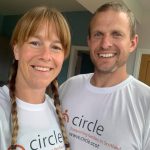 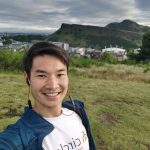 Only a month before the event started we were seriously considering cancelling it due to the Covid crisis. We couldn’t possibly have predicted that it would break all previous records for number of participants and amount of money raised. Our participants did an incredible job in trying times. The feedback we have had has suggested that the event played a part in both DARED runners mental and physical health during a month of lockdown where access to family, friends and social activity was severely limited.

The Facebook private participants group and the Strava activity app were both incredibly popular as DARED runners celebrated Personal Bests as a group, overcame injuries together and offered advice on routes, meals and motivation. We even had families, children, neighbours and pets acting as running mates, pace setters and cheering squads. 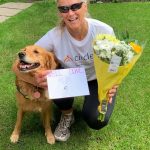 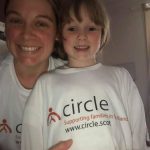 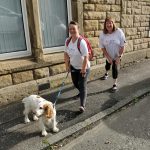 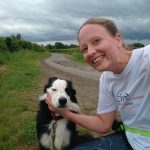 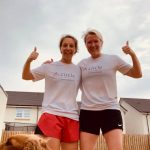 Circle’s very own staff, CEO, board of trustees and beneficiaries took part in the event this year, helping recruit family, friends and partners as well as raising awareness and money.

Sadly though this year did see the DARED founder, runner and inspiration, Mark Fletcher, decide to pass on the torch. We will be recruiting for Circle Charity Champions to help with DARED soon, so get in touch if you are interested. Though we will miss Mark it is only fair that Circle returns him to his family so that they can enjoy DARED free Summers in the future (though Mark did recruit quite a number of his family to take part in DARED with him). In its three years DARED has inspired over 600 runners to raise over £60,000 for Circle’s vital work. Here was Mark’s parting message:

“Thank you and Farewell

Well … what can I say. I am sat here with a glass of champagne trying to absorb the deluge of social media posts, kind messages and extremely generous donations. DARED is over for another year and I would like to say a huge personal and heartfelt thank you to everyone who has made it absolutely epic.

This year is my last as an organiser and there is no doubt I am stepping down on a high.

The concept of DARED came to me after the birth of my second son. My wife and I were struggling to keep active so we sat down to work out how we could allocate some time for exercise. We soon worked out that by shifting our priorities, we could each find half an hour every day to go for a run. It made me think that if we could, so could most other people, so why not set down the challenge.

I had completed a month of runs once before as the result of a post-midnight hogmanay bet. At that point, I was new to running and had previously had a rather unhealthy lifestyle, but this challenge showed me what I was capable of. A fortnight after finishing, I had signed up for the London Marathon. It is therefore a challenge I respect as it is accessible but demanding and rewarding. There were many times in that first challenge that I would have liked to quit, but I had committed to do it for charity so kept going to not let down my sponsors.

Youth work is something that I am passionate about and I truly believe that youth workers are unsung heroes in our communities. As a teacher, I see young people whose lives are diverted into a positive direction thanks to the connections that they make with youth work. Research by YouthLink Scotland shows that every £1 spent on youth work results in £7 in savings on education, unemployment welfare services, health and mental welfare services and criminal justice interventions.

Circle goes a step further. Not only do they positively engage with the young people, but they support entire families to break the cycle of multiple deprivations. They were therefore the obvious choice as a charity for DARED to support and so far the challenge has managed to raise £60,000 for them.

It has taken a whole load of people to turn DARED into a reality. Firstly I must thank the group of runners at Broughton High School, who were invaluable by coming up with the name, logo and generally for throwing ideas around in the first year. The Broughton Staff’s efforts in participating, signing up others and fundraising have also been astounding year on year.

When I arranged a meeting at Circle, I don’t think Darren had any idea what he was letting himself in for. He had only been in his post for a couple of months and generating income for a charity like Circle is already a very time consuming role without someone landing an annual month long event on you. The plan was never to create work for Circle, but to organise a virtual event like DARED takes a surprising amount of effort and Darren goes way above and beyond to ensure the challenge is as successful as possible.

I have been trying to loosen my grip on DARED and hand it over to Circle, and have decided that it is now time for me to step back completely from being part of the organisation of the event. I am just delighted that it is established and set to continue raising money and getting people active. By the way, if anyone would like to take my place and continue this work with Darren, please get in touch!

I have been absolutely blown away by such a positive spirit shown by so many people since DARED started, never more so than over the last few weeks. Not only have there been over 300 participants this year, there have also been nearly 1,200 people who have donated. That is over 1,500 people who have actively and positively engaged with this year’s challenge. That blows my mind!

The buzz on the social media channels has been incredible with messages of support, kindness and personal achievements.

It is the sense of community that makes DARED so special. Thank you all for everything that you have done to make it so successful. I cannot tell you how much I appreciate it.” 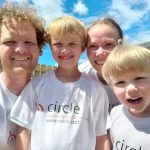 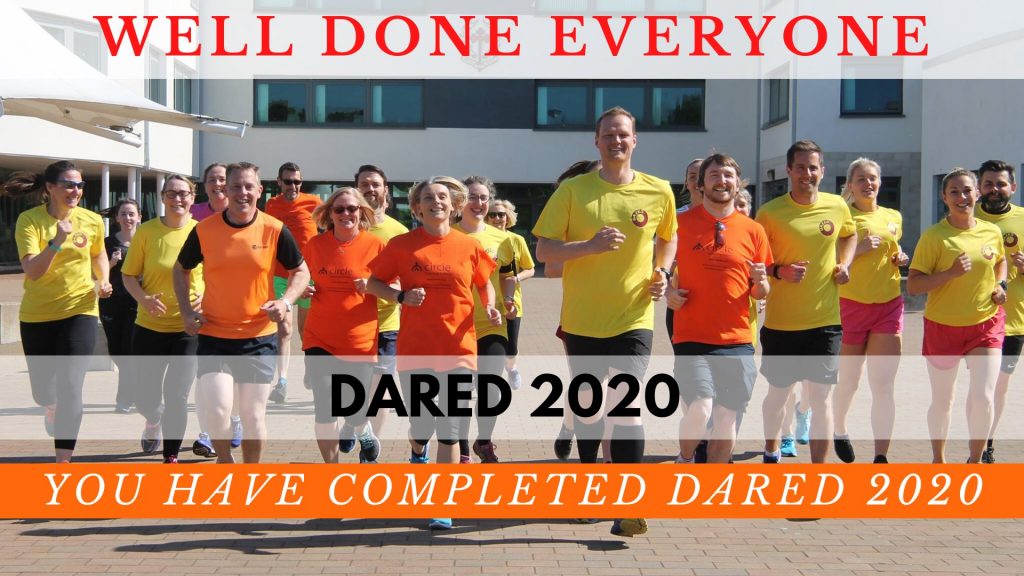