Families supported by our FABI team had an amazing October half term break. Children, young people, parents and grandparents came along to the day and had great Halloween fun with arts and crafts and face painting. The big event of the afternoon was meeting some special new friends – who wouldn’t want to be best pals with a cute little meerkat and a particularly large but gentle python! Thanks to Party Animals who made this afternoon truly memorable and gave everyone an opportunity to test out how brave they were! It would be fair to say that the children and young people were far braver than some of the ‘big folk’ who were in attendance (we’ll not mention any names of the worker who made a speedy exit out of the room when a little spider came to say hello)!

What better way to help this FABI team communicate even more effectively! An hour at Edinburgh’s Locked In where we had to work together as a team to work out a whole series of puzzles and problems. The reason… so we could save Edinburgh from a dreaded infection by recreating a lifesaving vaccine! We had 60 minutes to solve the puzzles and make our escape. Took us a little longer, but WE DID IT! An amazing way to spend time together as a team, working to people’s strengths and listening to each other. No matter what this FABI team are faced with, they always get there in the end… SUCCESSFULLY!

The FABI team want to say a massive thank you to Margaret and all her colleagues at TUNNOCKS who have outdone themselves once again by raising and donating £330 to the FABI team. This has helped to make Christmas a little less stressful for the families we support. An incredibly kind and generous donation and we can’t say THANK YOU enough, it will make a huge difference to the families we work alongside! 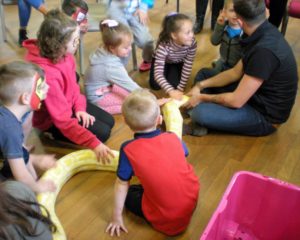